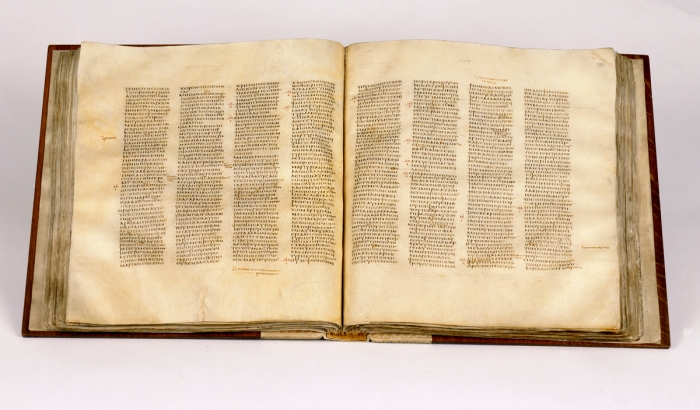 The fourth-century Codex Sinaiticus (“the Sinai Book”) is often referred to as the oldest Bible in the world. While this is only partly true, it doesn’t make the book any less important – textual critics (scholars who are “concerned with the identification and removal of transcription errors”) continue to consult the book in their futile attempt to establish the “original” texts of both the Septuagint and the New Testament.

So why do people call it the world’s oldest Bible? The Sinaiticus is one of the two earliest complete copies of the Christian Bible. The book contains the earliest surviving copy of the New Testament (in the Greeks’ vernacular Koine) as it exists in its present canon. Prior to this, individual books of the Bible were just that: individual books. The biblical canon had not yet been officially established, and different churches used whichever books they thought to be most legitimate and most helpful to them. Some of the books that got ditched when the canon was officially established include the Book of Jasher, the Acts of Uziah, and the the Book of the Wars of the Lord (which sucks, because it would have been amazing). However, not all of the non-canonical books were disregarded completely; some of the ones people were unsure about got lumped together in the Deuterocanon/Apocrypha.

Anyway, the point is that the Codex Sinaiticus is pretty darn important.

Each of the Codex‘s vellum leaves – there are just over 400 – is approximately 38cm high and 24.5cm wide. Each page has four columns of text, which makes the book look kind of like a scroll… I guess some people just couldn’t let the dying medium go without a fight. The book’s text is written in all-capital Greek uncial, which was supposedly the common script of the time although only four uncial manuscripts survive today. As for who wrote the book, there’s a continuing debate surrounding how many scribes were involved, although the fine people at the British Library seem pretty certain that there were four. Let’s just assume that they’re right. Let’s just assume that the people at the British Library are always right.

The majority of the manuscript is now held at the British Library, although other pieces are held at the Leipzig University in Germany, St. Catherine’s Monastery in Egypt, and the National Library of Russia. For more information about the Codex Sinaiticus, check out the book’s official website, where you can view a digital copy, or watch this dry, but informative, video.

View all posts by Leah

Have something to say? Cancel reply